skip to main | skip to sidebar

"Writing and Identity in the Jewish Tradition": Rome, March 27

Iberian-Judaica | Incunabula | Chassidism | Passover Hagadoth | Autograph Letters Manuscripts | Graphic Art | Ceremonial Art | Exhibition Dates
For further details of any of the items mentioned click on the relevant lot numbers.
(Note: If links are not working please use HTML version by clicking link at very top of this e-mail)

Kestenbaum & Company's sale of Fine Judaica to be held on Thursday, February 24th at 3:00pm will mark the company's Fiftieth Auction since its establishment in 1996. With an exclusive commitment to the field of Fine Judaica, Kestenbaum has over the past fifteen years offered some 17,000 lots comprising an immense quantity of Judaic properties. Highlighting this Jubilee auction, will be the historic Cassuto Collection of Iberian-related Books and Manuscripts, alongside which, this extensive sale will feature Rare Hebrew Printed Books, Manuscripts, Autograph Letters, Graphic & Ceremonial Art.
The foundation of the Alfonso Cassuto Collection was laid by Mr. Cassuto's great-grandfather Jehuda de Mordehai Cassuto who in 1835 acquired a sizeable library assembled in the 17th century by the Namias Family of Hamburg. Subsequent generations of the family greatly expanded the library and Alfonso in particular immersed himself enthusiastically in the books and the library's further development. The present collection was consigned to Kestenbaum & Company by Alfonso's son, the distinguished composer and conductor Álvaro Leon Cassuto, Artistic Director of the Lisbon Metropolitan Orchestra.

For further information relating to bidding or any other queries, please contact:
Daniel Kestenbaum
Tel: 212-366-1197
Kestenbook@aol.com

Among the Chassidic Books, the rarest is undoubtedly an extraordinarily fine copy of Schneur Zalman of Liadi's Sepher Likutei Amarim, the fundamental exposition of Chabad Chassidic philosophy, Slavuta, 1796, at a pre-auction estimate of $100,000-120,000 (lot 71). Other notable Chassidic texts in the sale include a scarce copy of Schneur Zalman of Liadi's first edition of the Shulchan Aruch (Orach Chaim), Kopyst, 1816, estimate $8,000-10,000 (lot 74) and the first anthology of the teachings of the Ba'al Shem Tov, Kether Shem Tov, two parts bound in one, Zolkiew, 1794, at an estimate of $7,000-10,000 (lot 70).
Passover Hagadoth

The Autograph Letters section of the sale boasts an impressive selection of written correspondences by prominent Rabbinic thinkers and Chassidic leaders. Included are letters by the Chofetz Chaim and members of the Halberstam Family. Also on offer is correspondence from the Schneerson Family including letters written from Latvia in 1927 shortly after the family's expulsion from the Soviet Union. Far and away, the most prominent lot to be auctioned in this section is an immensely rare autograph letter written by the paramount Chassidic leader, Reb Nosson of Breslov. The letter was written by Reb Nosson in 1842 to a close disciple, Reb Meir Mirkis of Teplik, who was ailing at the time, and the missive has remained with the Mirkis family for nearly two centuries. This letter is of singular importance as it contains, at its heart, one of the central philosophies of Breslov Chassiduth: "Joy is the remedy for all sicknesses." The pre-auction estimate is $40,000-60,000 (lot 237). Another star lot in this section is a group of childhood photographs and autograph letters written by Oskar Schindler, the renowned rescuer of Holocaust-era Jews. The letters were written to Schindler's first cousin Emily Tyrolt. The pre-sale estimate is $5,000-7,000 (lot 245).

The Graphic Art section features paintings by Artur Markowicz, Saul Raskin and Otto Eichinger among others. Of particular interest is a Hebrew Map of the World by Benedictus Arias Montanus, Antwerp, 1571, at an estimate of $700-1,000 (lot 354). A single-owner consignment of Fine Photography notably includes the works of Roman Vishniac (lots 371-373).

This Jubilee Auction is particularly exciting and we look forward to welcoming a broad range of new clients likely to be drawn to the attractions found in the celebrated Cassuto Collection. 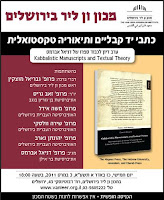 Call for Papers; "Authorship in the History of Jewish Textual Culture"

CFP - Authorship in the History of Jewish Textual Culture

We hereby call for papers on the subject of authorship in Jewish and Hebrew
textual cultures, for a volume of studies published by the Sapir Forum for
the Discussion and Research of Culture. The purpose of the volume is to go
beyond the issue of the identity of the real author and move towards a
meta-cultural discussion of the transformation of the conception of the
author and its implementations in various Jewish cultures throughout the
ages. Beyond an examination of the formal characteristics of the text, we
expect the issue of authorship to raise other, in-depth questions related to
the various Jewish texts and cultures such as:

- Is the author perceived as the creator of the text? And if not - who is
perceived as its author?
- How is the presence of the narrator expressed in the text? What is the
role of the addressee in the creation of the text?
- Does the text have one author or many? What is the relationship between
the various partners creating the text?
- What is the status of 'the source of inspiration', the editor, the
compiler, the copier, the translator and the like, who stand behind the
text?
- How does authorship relate to the technological, social and
institutional practices of a text's composition, transition and reception?
- What is the role of the author in creating the normative status of the
text?
- What is the relationship between the actual author and the fictitious
one (in pseudo-epigraphy, for example)?
- How is the author a model for the national subject (individual or
collective)?
- What are the relations between the human author of the text and the
divine "Author" (prophecy, incarnation, inspiration)?
- How is the function of the author related to non-textual cultural
functions?
- What is the theological, political, ideological, etc. significance of
the manner of appearance of the author in the given field of discourse?

The papers can address these questions or similar ones, while dealing
with a relatively large segment of the Jewish and Hebrew textual culture
such as: the Bible, *Midrash*, Gaonic literature, renaissance poetry, and
so on, or they can refer to a narrower definition such as: *Rabbi
Ishmael's Mekhilta*, the *Tikkunei Zohar*, the political journalism in "*
Ha'Shiloah*", etc. Papers may be written in Hebrew or English. Papers
that will be chosen by the editorial board will undergo a professional
reading by a reviewer from the paper's field, and they will be translated so
that the volume will appear in both languages. The papers, which will not be
longer than 9000 words, must include a textual reading alongside fundamental
conclusions as to the historical, theoretical, literary, ideological, or
theological aspects. These can refer to the formal aspects of the presence
of the narrator in the text as well as to more fundamental questions such as
the manner in which the perception of the author in the text reflects
broader basic conceptions related to the function of "the Author" and the
institute of authorship in the given historical period and culture.

Please send a proposal no longer than 600 words, detailing the subject of
the paper, the fields of research from which it is written, its hypotheses,
as well as an initial bibliography, no later than May 1st, 2011. The
papers should be ready no later than January 1st, 2012.
Itamar Brenner itamar.brenner@gmail.com
Amit Assis amit@assis.co.il
Posted by Adam Shear at 1:30 PM No comments:

Other Websites of Interest